Try our Frames Site, if your browser supports it - it loads much faster.

Some members of staff, and others we know.

If you can think of amusing, sordid, or secret information about the people featured here please email ( in total confidence! ) mike@mwc.co.uk 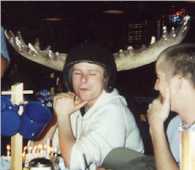 Words fail us all, but we think this is a normal night out for Calvin. 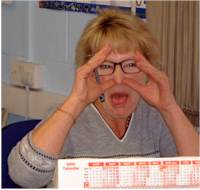 Calvin's mother, and now working for us.

I apologize for the poor picture quality ( taken by James after a night out ! ) but Kirstie really has blue hair !! - the picture does not do it justice at all. 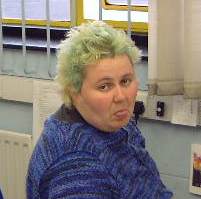 Kirstie with a new hair "style" !

Our man in London, likes to fly, but we keep him too busy to enjoy his hobby, ( or maybe don't pay him enough to indulge in it. )

Also well known for his fondness of riding mopeds, and cars with engines smaller than 1000 cc!

Please visit his site  http://www.alrayner.co.uk ( he needs some encouragement )

Seen here instructing her daughter in the fine art of Designer Clothes shopping.

Teenage son, and part time school holiday worker. Also known as "Kevin" (viewers of Harry Enfield can relate to this), and can identify from the picture his delight at the prospect of another day at work with his Mum and Dad. Interestingly and more hopefully, also the source of the picture below!

The office girl that we'd like to employ. Perhaps a little overdressed for her role.

An ex Military man, if you ever want to stop John working, just ask him about Army life, and be prepared to hear some interesting stories. John is responsible for our Hire equipment.

Reluctant drink maker, if she is not smoking cigarettes in the yard, Fiona answers the telephones. When we cannot find files and paperwork it's Fiona's fault.

Delivery driver and dogsbody. Drives a white van, and as Jeremy Clarkson has proved, its faster than a Ferrari - with the dents on the van to prove it.

Service Manager. repairs more GP300 radios per week than anyone else in the UK 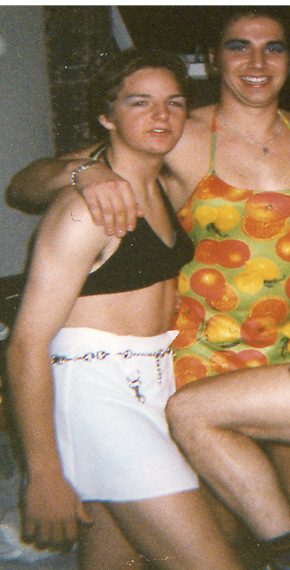 Our staff pictures are normally smaller than this, but we wanted you to be able to see the "finer points" of our latest member of staff. James ( on the left, we do not know who his "friend" is ). Main hobbies Drinking ( after work ), Smoking, and chatting Fiona up, also a now essential member of our hire team.

At Jame's insistence, a more normal picture of him - on the right this time, with "another friend."

The following pictures are under the category of others that we know.

A Yorkshire man whose arms are shorter than his pockets. Also one of Fiona's Ex boyfriends. ( Fiona is very insistent that we point this out, as her new German boyfriend has access to the Web, and has seen this page ).

with questions or comments about this web site.
Last modified: February 09, 2006