Try our Frames Site, if your browser supports it - it loads much faster.

Based on the less-crowded spectrum around and above 800 MHz, this system is rarely affected by external noise and interference from other sources.

The Sony Freedom Series can use up to 112 selectable frequencies depending on the location. Available frequencies and their number depend on local frequency regulations.

PLL (Phase Locked Loop) frequency synthesis systems are used for both transmitters and receivers, and provide excellent frequency stability. These PLL systems generate frequencies from values stored in a pre-programmed channel plan held in memory within the transmitters and receivers. Using this Sony channel plan enables users to quickly select frequencies that are free of intermodulation products when used in simultaneous multi-channel operation. The receivers have a self-detect and skip function of unusable channels.

Wireless microphone systems operating at UHF are generally acknowledged to be more expensive compared with VHF systems, principally because of the higher cost of the advanced technologies required for UHF circuitry.

By providing a limited model range Sony has been able to design the Freedom Series so that it provides the advantages of UHF diversity reception at prices comparable with VHF models. The number of channels available within the wider UHF frequency range gives Freedom Series wireless microphones a clear cost per channel advantage.

This system can work with any components of the current Sony 80OMHz UHF synthesized wireless system. The user can flexibly customize the system for higher audio quality or more operating channels, preserving past investments. When using the WD-820A Antenna Divider with the two WRR-801 A receivers, up to 12 channels of simultaneous operation are available.

Monitoring of wireless microphone and transmitter low-battery alarm at receivers

Low-battery alarms from the wireless microphone and belt-pack transmitter are clearly displayed on the front panel of receivers, lessening the chance of transmission being interrupted

The modular configuration of the WRR-801 A Receiver gives the new Freedom Series system outstanding flexibility. With its built-in antenna divider, the number of operational channels available can be easily expanded by adding WRU-801 A Receiver Modules into the slots. The WRR-801 A is supplied with one receiver module, but up to five additional optional modules can be simply slotted into the receiver frame, giving simultaneous operation on as many as six channels.

To build on its basic flexibility, Sony has introduced some important options for the WRT-805A Belt-pack Transmitter. These include an instrument cable for wireless guitar applications, lavalier microphones and a headset microphone.

The use of Sony wireless devices is regulated by the Regulatory Authority of each country's Government Administration and authorized users are required to obtai an appropriate operating lirence.

Ready for use with front-mounted antennas

Expandable diversity receiver, accepting up to six WRU-801 A Receiver Modules (one WRU-801A supplied with unit)

Auto channel assignment of additional receiver modules as they are fitted

self-detection and skip of unusable channels

Ready for use with front-mounted antennas and hand grips

Connections for up to two pairs of antennas, providing DC 9V supply for an-820A antennas

Cascade connection for a second WD-820A or a fifth receiver 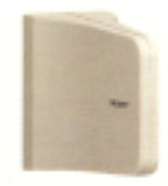 Powered from receiver or antenna divider

Used in pairs for diversity reception

Easy installation on a wall, or on a microphone stand with the supplied stand adapters

Designed to be inconspicuous and harmonize with any surroundings

The WRT-867R has channel select switches, and also has an LCD to indicate the selected Euro TV channel number. There are channel switches and an LCD indicator inside the body to prevent mis-operation. A full range of popular alternative vocal capsules are available with this model.

Send mail to CompanyWebmaster with questions or comments about this web site.
Last modified: February 09, 2006